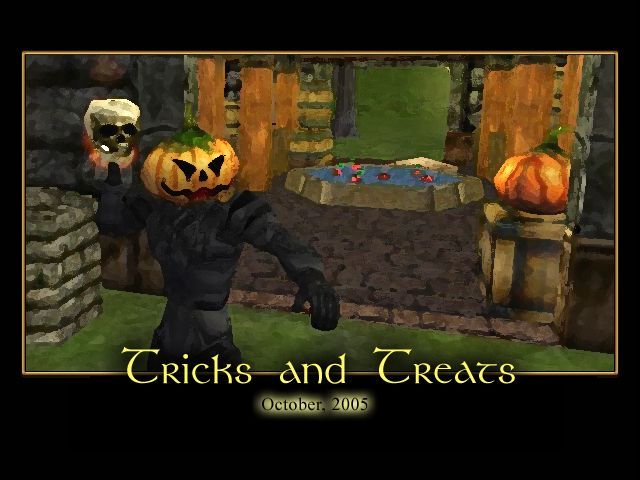 On October 26th, 2005 the "Tricks and Treats" monthly event went live. As the third monthly event after the launch of Asheron's Call's second expansion, Throne of Destiny, this event moved the story forward during the "The War of Blood and Shadow" arc.

This major theme of this event was celebrating the festival of Halloween, with many new holiday-themed items added. As the barrier between the living and the dead lifted and spirits roamed the land, random attacks by supernatural creatures occurred in many Isparian towns. Glenden Wood was assaulted by waves of ghosts and wisps, while Holtburg weathered an invasion by fiery, pumpkin-headed scarecrows, and the ferocious Pumpkin Lords were sighted en masse as far north as Neydisa Castle.

Players also assisted the rogue scholar Qath al-Haddash with investigating Viamontian dig sites across the Direlands and northwestern Osteth to learn more about the connection between the events of the legendary Grael Rebellion, the Falatacot, the Shadows, and the mysterious creatures known as the Mukkir.